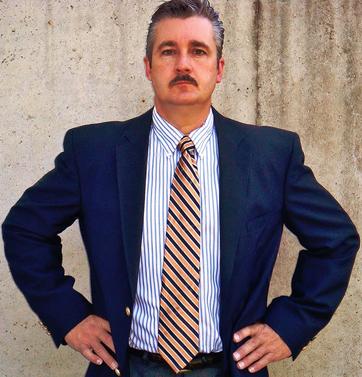 Our government is not being managed in a manner that our founding fathers had envisioned, the Constitution is being trampled on and very few in Congress will stand up for the paper it is written on. Many of the politicians in Washington have become self-serving at the expense of the people... we have moved into a direction in which my conscience cannot see the country left for future generations. The United States is in dire need of sound judgment, and sound leadership, self sacrificing for the people, by the people, making decisions which have  a positive impact on the country for current and future generations. Congress is not listening to the voice of the constituent... the current approval rating for Congress is in the low teens and they continue to close their eyes and ears to the voice of the people. Congress continues to make excuses at the expense of the American people. I believe that the American people deserve a voice in congress and that is what I intend to do. Over the past several years we have had problems with the IRS, Healthcare, Immigration Reform, Fast and Furious (guns to Mexico drug cartel), Government shutdown, Bengasi Embassy debacle, Syrian threats, Iranian threats, North Korean threats, issues in the Ukraine, Health Care reform, Border Security, Ebola concerns and what has congress done? Well, not much. Congress has held hearings, but has held no one accountable/ I say it is time to hold congress accountable. A vote for me is a Victory for the people of Southern Indiana, and the nation, I will be your voice in Washington, not my own!

We have too much spending, too much mismanagement and too much infighting among the politicians in Washington. We have reached a point in time where we need to make sound decisions for the future of America. Many of our politicians have led the American people astray. It is my intention to be a leader and a mediator for the people of Southern Indiana, a leader who is willing to reach across the aisle when necessary and to take a stand when necessary...we need people who actually do what they were elected to do...read the bill before it is voted on (healthcare), and stand up for the people who elected them. The Budget is at eighteen trillion dollars and the  politicians have shown little enthusiasm for reducing it, we need to balance the budget and stop putting a band aid fix on it. The people have spoken but the folks in Washington are not listening, I will be the voice of the people of Southern Indiana. We say we are concerned about who crosses our border, yet have done little to control it...I will work towards controlling our border security. Our military men and women have been asked to do a job and our politicians have let them down, our men and women of the armed services deserve better, not to beg for their needs; the medical needs are not up to par for our veterans and take far too long to receive. I will support the needs of our men and women of the armed services. Social Security has been weakened by misguided and misinformed politicians, it needs to be strengthened for our retired folks and future generations; we have not kept up with the rising cost of living, wages have not kept up with inflation; I will work to ensure that SocialSecurity is strong, wages are improved upon, and available for future generations.

We have a strong need to bring back jobs to the United States, and reduce outsourcing at the expense of the American people and American jobs. I will work to create jobs for the people of Southern Indiana and America. Over the past two decades I have seen several politicians elected in District Nine, but have yet to see them accomplish anything significant for the american people. America is strong and resilient and we need to continue on a path of greatness, I will work to uphold the values and traditions of the American people and the  people of Southern Indiana, I will support the needs of all the people in District Nine, not my own. I support a strong Military, and a strong Workforce for a strong America.

"Believe you can and you’re halfway there."